The Hospitality Industry Trust (HIT) Scotland has announced the recipient of this year’s prestigious Andrew Fairlie Scholarship, which is awarded annually in memory of the late Andrew Fairlie’s unwavering commitment to supporting and nurturing culinary talent in Scotland.

The winner is Eddie Brown, a 30-year-old sous chef working at The Carnegie Club at Skibo Castle in Dornoch.

Stephen McLaughlin, lead judge and head chef at Restaurant Andrew Fairlie, said: “What a fabulously hard-fought finals day we have just had. All our finalists have shown exactly why they were selected for the final. Huge congratulations to them all.

“They were all tough competitors and genuinely any of them could’ve been awarded this year’s Andrew Fairlie Scholarship, but unfortunately for them there can be only one winner…

“This year’s winner, Eddie, has shown great skill and a real understanding of the tasks that we had set out for them. He has displayed a rich understanding of their craft as a chef and also used their knowledge of Scottish and French culinary heritage to help set them apart as this year’s recipient of the Andrew Fairlie Scholarship”.

David Cochrane, HIT Scotland Chief Executive, added: “This group of chefs all showed extraordinary dedication and passion for the task at hand, and I commend them all for their sterling efforts in the kitchen. Special congratulations must of course go to our winner Eddie, who has excelled in their culinary talents and displayed a creative flair that Andrew would have been proud of.”

Conor O’Leary, Gleneagles Managing Director, said: “Here at Gleneagles, we’re hugely proud of the role we’re able to play in nurturing talent and creating opportunities for young people to learn and grow. The Andrew Fairlie Scholarship enables aspiring chefs to demonstrate their enthusiasm and passion for the culinary industry whilst learning from some of Scotland’s very best chefs.

“Andrew is sorely missed by us all but we’re incredibly proud to be honouring his legacy by continuing our support of this scholarship, which creates greater opportunities for talented individuals to develop. On behalf of Gleneagles, I’d like to congratulate Eddie on winning this year’s Scholarship and wish him all the very best of luck on the next stage of their career.”

Ype van der Schaaf, Sector Manager of Hospitality and Food Studies at Perth College UHI said: “Hosting the Andrew Fairlie Scholarship final for the second time within our kitchens and facilities was a great opportunity to support HIT Scotland.

“Our Professional Cookery students got the chance to support the finalists and had a phenomenal experience seeing industry standards taken to the next level. Our students welcomed the chance to be involved. Many congratulations to the well-deserved winner, we enjoyed watching all of the finalists work and create their fantastic dishes.”

Eddie will gain industry-wide recognition as an Andrew Fairlie Scholar and experience once-in-a-lifetime opportunities, such as a practical stage in an international kitchen and at Michelin-starred restaurants Restaurant Andrew Fairlie at Gleneagles and Core by Clare Smyth in London. 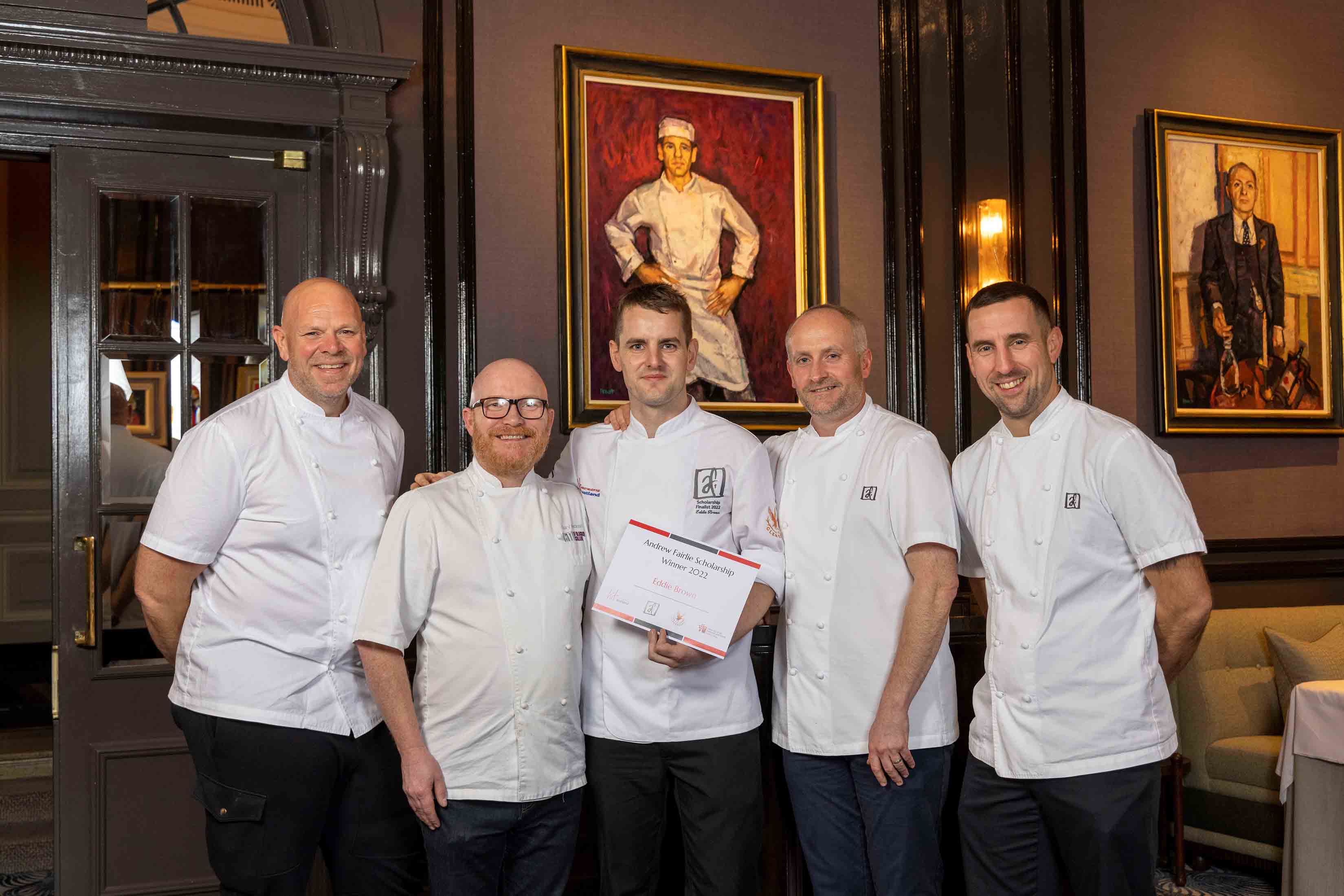